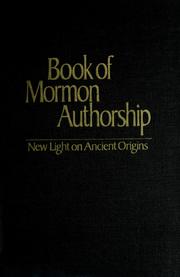 Book of Mormon Authorship. Does the Book of Mormon exhibit evidence of divine/ancient origins or human/modern origins? Book of Mormon 5, Changes Despite the claim that Joseph Smith's "translation" was by the gift and power of God, several thousand changes have been made to the Book of Mormon since its original printing. In this volume, nine Latter-day Saint scholars each address the question of Book of Mormon authorship from a different approach. The tests of authenticity they employ rely on analytical techniques borrowed from such diverse disciplines as history, literature, statistics, and ancient Near Eastern studies. The papers are grouped into four parts: 1) The Nineteenth-Century Origins of the Book of Mormon, 2) The Logical Structure of the Authorship Debate, 3) Letting the Text Speak for Itself, 4) Locating the Book of Mormon Geographically and Culturally/5(13). Hilton, John L. "On Verifying Wordprint Studies: Book of Mormon Authorship." BYU Studies 30 (Summer ) Hoskisson, Paul. "An Introduction to the Relevance of and a Methodology for a Study of the Proper Names of the Book of Mormon." In By Study and Also by Faith, ed. J. Lundquist and S. Ricks, Vol. 2, pp. Salt Lake City,